Life Is Energy, Energy Is Life. 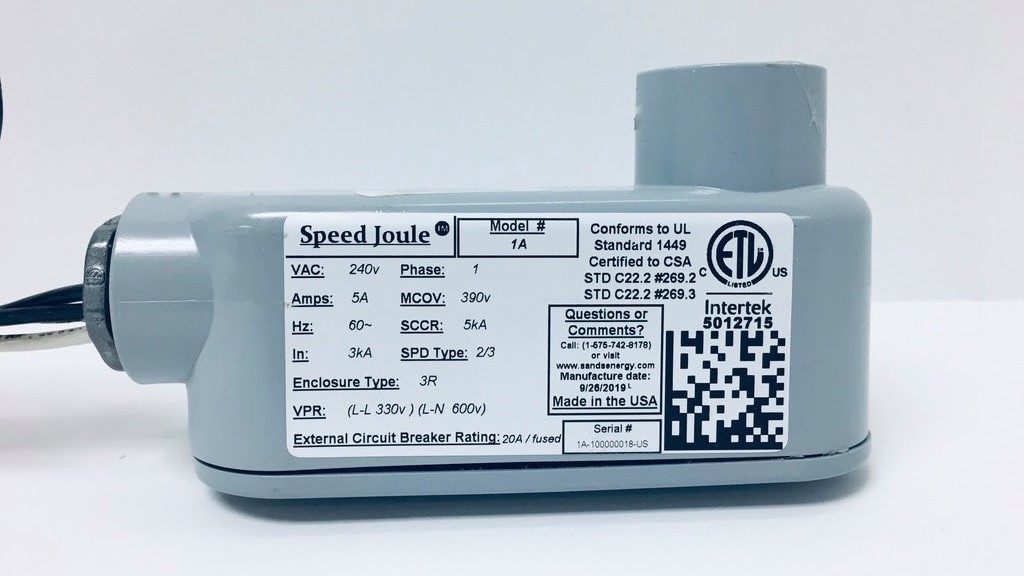 The SPEED JOULE unit was designed for surge suppression with the additional benefits of noise filtering and A/C line conditioning. However; as we have demonstrated, real energy savings in real kilowatt usage is achieved. This is savings from 10% to 30% per month. We believe our product is superior to other technologies on the market, providing protection and the extension of service life to facility electrical equipment plus real energy savings produced by a method that is not invasive to electrical, electronic appliance and commercial equipment control systems. We do not imply the NOLA motor control technology nor any other variation of active voltage or current control. Our device contains only passive electronic components and is simply installed in parallel with electrical services.

With the SPEED JOULE installed, at the load or where the power is used there is no change in the supply. On the line side; however, less energy is required from the utility company to perform the same amount of work. The filtering capacitors in our units usually counter the inductive loading in the electrical network on which they are installed often resulting in improved power factor, line loss reduction, current carrying capacity and voltage stability. However, power factor correction is not the primary objective. Other energy saving products on the market and capacitor bank applications which rely upon power factor correction; this do not achieve our percentage of real savings at the utility meter.

Correcting the phase relationship of the voltage and current from the power factor of say .75 to unity (1.0) will usually only save 1% to 4% in real kilowatt usage and when there is no power factor penalty and with the metering in kilowatts you will get line loss reduction, larger current carrying capacity and greater voltage stability; but, usually no greater than 4% of actual billed savings.

The SPEED JOULE surge protection system which follows the guidelines called out in (ANSI/EEE C62.41-1980) uses M.O. Vs and filter capacitors to achieve surge and spike protection. M.O.Vs were chosen as they have greater energy handling capacity than the high speed semi-conductors such as (silicon avalanche diodes). They have no follow on current and their response time is more than sufficient for the types of transients encountered in the A/C mains environment. A common misconception is that an M.O.V is irreversibly damaged every time it is required to suppress a transient. Under high energy transient conditions in excess of the device ratings, the V-1 characteristics of the M.O.Vs seem to change. This change is reflected in a decrease in the nominal voltage. After applying a second, third or subsequent pulse, the nominal M.O.V rated voltage can be sent return to its original value. A failed component is defined by a +/-10% in the nominal voltage at the 1mA point. Field studies and laboratory tests have shown that the degradation with results after a number of pulses outside the ratings of the component, is safe for the equipment being protected. Shows that total combined ratings for our units provided by the M.O.V - energy handling capabilities, clamping voltage, nominal operating voltages and component surge life expectancy at +/-10% nominal ratings. The table is derived from manufacturer specification data sheets. The 8/20 micro second response curve is ofter cited as the speed of M.O.V response time, when in fact they can begin t shunt spike and transient current from the line in as little as 10 nanoseconds.

Small filter capacitors fo the correct value are used to provide a low impedance path to ground for high frequency transients and noise. These have a protection rating level of 1.3(kV).

Larger filtering capacitors of the correct values are used in conjunction with small filtering capacitors and used for line conditioning to stabilize and even out electrical swells and surge of longer duration. The SPEED JOULE units effectively smooth out the incongruities of the power voltage/current wave from. As a secondary benefit, the larger capacitors will counter inductive loading and usually improve power factor to some degree where needed with the benefits associated with it. However, significant improvement is kilowatt reduction has been achieved on electrical networks that are scarcely inductive and on networks where the power factor has already been improved at or near unity.

Although not specifically addressed t correct specific harmonic octaves or problems in the industrial environment, the interaction of the M.O.Vs, small filter capacitors and larger filters capacitors do attenuate harmonics. Harmonics of the third and fifth octaves are reduced 10 to 20db. The higher harmonic multiples about 2100 Hz are largely shunted to ground along with the higher frequency random noise. Total Harmonic Distortion is reduced significantly. Reduced Harmonic and Noise & Surge Suppression with more efficient wave forms will result in less heat loss in electrical equipment especially meters and inductive loads. This contributes to a definite savings in overall kilowatts usage per month. Additional benefits include lower currents on the neutral sine wave, resulting in safer operating conditions; better reception on audio-visual equipment and reduction in detrimental effects of noise-based interference and distortions.

The SPEED JOULE units comes in various sizes of single and three phases. They are sized according to the capacity of the electrical system kilowatt consumption, percentage and type of electrical equipment. On inductive motor application the horse power rating is used as well as associated equipment on the same network. To achieve the best results on large applications, larger units on the main panel and smaller units on sub-panels will be used.

Spending too much on your energy bill? We have the solution.

Life Is Energy, Energy Is Life.

JDC ENERGY RESOURCE GROUP is El Paso’s premier resource for your energy needs. We specialize in facilitating you, the customer, with the best quality service. As the world evolves and technology gets more advanced, one thing will never change and that is the need for energy, because LIFE IS ENERGY.